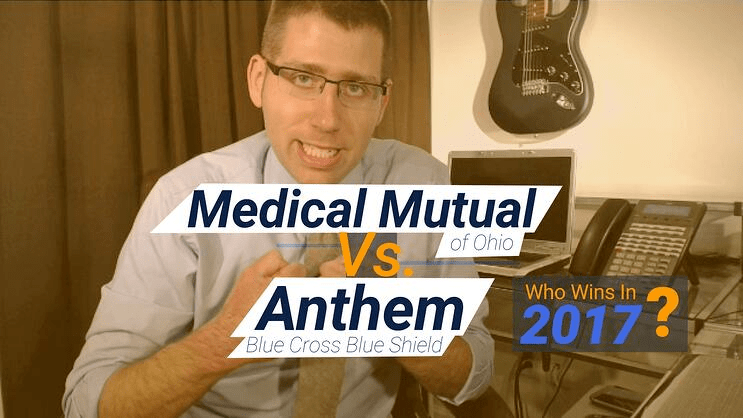 Medical Mutual of Ohio Vs. Anthem Blue Cross Blue Shield: Who is Better?

This is the first in a series of posts that will compare all of Ohio's top insurance companies side-by-side to take a look at the strengths and weakness of each company and how they compare to one another.

There's no better place to start than with the top two insurance companies (in my opinion) Ohio has to offer.

There's a very good chance as you start, continue or finish your search for the right health insurance company, you will almost certainly be considering one of these two.

But what do you need to know about each of them to make the most informed health insurance decision you can?

That's what I hope to provide you today.

If you are unfamiliar with my family's agency or who I am, let me quickly get you up to speed with my history dealing with both of these companies.

My grandfather started the family business almost 60 years ago in 1955 as an independent insurance agency. That meant we sold insurance for a wide range of companies, companies that we wanted to represent and felt would be a good fit for you.

Fast forward 50 plus years and I've been dealing with both Anthem and Medical Mutual since I came into the business over seven years ago and I have yet to have any major problems with either company.

Sure there's an occasional issues with billing or getting a minor service/treatment (we call them claims in insurance) covered. But neither company has walked away from serious medical bills and left one of our clients in financial ruins.

Back In 1926 John R. Mannix, the administrator for Elyria Memorial Hospital started playing with the idea of hospital pre-payment and the basic of health insurance. This eventually led to the formation of the Cleveland Hospital Service Association (CHSA) in 1934. It was the first health insurance company established in Ohio and only the seventh in the country. It also was the first to allow you access to multiple hospitals, or what we now call a network today.

In 1984, Medical Mutual of Cleveland officially merged with Blue Cross of Northeast Ohio to create Blue Cross and Blue Shield of Northern Ohio.

In 1997, the company left the Blue Cross/Blue Shield Association and finally become Medical Mutual of Ohio.

The company has over 1.6 million customers and 2,500 employees and is the oldest and largest health insurance company in Ohio.

They are headquartered in downtown Cleveland and also have office buildings in Cincinnati, Columbus, Dayton, Independence, Richfield, Toledo and Youngstown. In addition to an information systems facility in Beachwood.

The Blue Cross Blue Shield Association (BCBSA) is a federation of 37 separate health insurance organizations and companies in the United States. They combine to directly or indirectly provide health insurance to over 100 million people.

Anthem began its insurance journey in the 1980s as a spin-off of American General Insurance.

It became a publicly traded company in 2001 with its final merger in 2004 with several other Blue Cross Blue Shield organizations in different states.
Also in late 2004, Anthem and WellPoint merged, with the combined company taking the WellPoint name.

NOTE: Medical Mutual is not offering health insurance in 57 counties in Ohio this year and it's very possible you won't have the option to buy a plan from them. You can read more about that here including a complete list of counties.

They are only offering their full SuperMed POS network in 9 counties throughout Northeast Ohio this year.

Medical Mutual will have a total of seven plans available inside of Ohio's Health Insurance Marketplace, which break down like this.

They will also keep all their plans as embedded deductibles, or split two per family deductibles. In less fancy insurance terms that means split. For example, instead of your entire family working towards an $8,000 deductible, you'll now have two $4,000 deductibles shared by any combination of family members.

Outside of the marketplace Medical Mutual will offer a total of six plans.

Again, here's a quick look at those plans:

They will also have an HMO version of those plans avalaible in 23 counties in Ohio, both inside and out of the Marketplace.

Here's the list of HMO only plans that will be offered outside of the Health Insurance Marketplace:

The only difference in the HMO version of the plans is the limited network you'll have access to in your region of the state.

You will also notice Medical Mutual includes the word "Market" in the name of all the plans that can be bought through Ohio's health insurance market place (or exchange as people still like to call it).

Anthem tends to prefer to offer quantity over quality. They have 11 PPO plans available to purchase inside and out of the health insurance marketplace.

Here's a complete list of the PPO plans Anthem will offer in 2017:

NOTE: The “X” in the plan name will only show up if you purchase it from healthcare.gov. That means if you buy one of these plans directly from Anthem there will be no X in the name.

You can access an overview of all of Anthem's health insurance plans in Ohio for 2017 here.

In addition to the 10 PPO plans, Anthem will also have 10 HMO plans avalaible as well.

Overall, Anthem is going to give you more choice. However, just because there are more plans doesn't mean it will makes sense for you.

This has been the biggest differentiation between the two companies since the Affordable Care Act kicked off last October.

Each company drew a line in the sand for different reasons and has stood by it since. Until this year when Medical Mutual had to make drastic changes to the where they would sell health insurance in Ohio for 2017.

As I've mention before in other corners of our site, Medical Mutual has worked hard to maintain the best overall network of doctors and hospitals you will find in the state of Ohio, if you live in one of the lucky nine counties.

Up here in Northeast Ohio, where we are located, you will have access to the Cleveland Clinic and most of the University Hospital system.

The biggest exclusion is the main Case Western Reserve campus in Downtown Cleveland.

Of course, it's important to note that networks do change very frequently and that you should ALWAYS confirm your doctor or hospital is still in-network before receiving any major treatment.

Anthem on the other hand made some dramatic changes in 2014 and has yet to reverse course on them to restore their once dominate network.

Anthem has for better or worse chosen one major hospital network in each major city throughout Ohio for you to access. Cutting out major players like the Cleveland Clinic and other across the state.

Here's a PDF of latest list of hospitals by county that are in Anthem's network:

They will be pulling back their “Blue Card” this year to only include emergency room and urgent care facilities out of sate. That Blue Card traditionally gave you access to all types of Blue Cross Blue Shield facilities across the country.

When it's all said and done and the dust settles, I feel much more comfortable with the network Medical Mutual is providing, however Anthem's network could be a solution if you live outside of the counties Medical Mutual is delivering its A game.

Last year in 2016, Medical Mutual won the price battle for the third year in a row. Also keep in mind they dominated the network war and had a solid offering of plans.

2017 is a warzone. Both companies are going to be in the ballpark of each other, however the biggest issues isn't going to be price, rather where you live.

Even though it still looks like Medical Mutual is winning the head-to-head price war with Anthem in the few counties they're competing at full strength.

Anthem is going to pick up a lot of business Medical Mutual is letting go of. For the first time in awhile, Anthem will probably end up being the best option for most of the people in Ohio who don't live in the Northeast part of the sate.

This may sound like a hokie, canned health insurance agent line, but in all honesty either company will be more than acceptable protecting you and your family from a medical emergency.

All of these little differences are centered around convenience, preference and in some cases, money out of your pocket.

At the end of the day, they will both do the most important job of health insurance policy, That's protecting you from a major medical emergency.

Now it's time to see what these two companies look side-by-side for you.