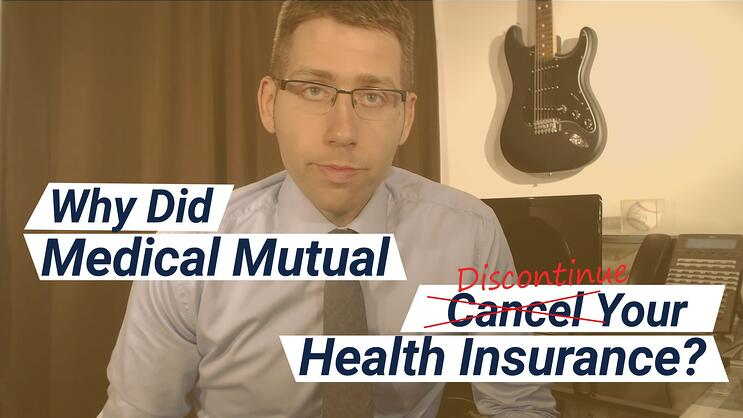 Why Did Medical Mutual Cancel Your Health Insurance Policy?

First, let's get one thing straight, these cancellations or discontinuances only apply to individual health insurance policies in certain counties in Ohio.

You might have recently received a letter in the mail from Medical Mutual letting you know that they won't be offering your health insurance plan in 2017.

As a result, you might have blacked out momentarily or suffered a moderate panic attack.

Your health insurance isn't going anywhere until the end of 2016.

You're just going to have to pick a new insurance company for 2017 when open enrolment starts on November 1.

Nevertheless, I'm sure you're a little confused as to why Medical Mutual did this and what it all means.

After doing a little digging and putting all the pieces together, here's a few answers to questions you're probably asking yourself.

I thought it was against the law to cancel people's health insurance policies?

Medical Mutual can't cancel your policy because you use it too much or are costing them too much money.

The only way they can cancel it is if they no longer offer that entire plan to every in your area. It's really more like discontinuing a product.

Why did they discontinue health insurance in my county?

If you're walking around somewhere reading this article on your phone, you might want to sit down, because things are going to get real.

You may or may not have seen a flurry of news stories about the different insurance companies backing out of Obamacare or losing tons of money.

The truth is, almost every insurance company that sells health insurance through healthcare.gov or the Health Insurance Marketplace has lost hundres of millions of dollars.

Medical Mutual is no different.

In fact their CEO, Rick Chiricosta, said in a recent article in the Cleveland Plain Dealer that “about 6 percent of our business (is) driving a $50 million deficit in two years."

They lost $50 million dollars in the last two years on only six percent of all people they have insured.

There choice was to either increase everyone's rate (Medical Mutual would prefer that I don't say the exact percentage but it was somewhere between 20-50 percent) or drop plans in certain counties that they were having a hard time competing in.

Here's a list of all 57 counties Medical Mutual discontinued their plans in:

Why were they having a hard time competing?

A big part of health insurance is your insurance company's ability to negotiate reduced prices from doctors and hospitals.

Medical Mutual is headquartered in Cleveland and has always had a much stronger hold on Northeast Ohio than any other region in the state.

When you get outside of Northeast Ohio and the Columbus area, Medical Mutual wasn't able to negotiate the same type of rates with doctors and hospitals as they could around Cleveland.

That means cities like Toledo, Youngstown, Dayton and Cincinnati were trouble spots for Medical Mutual to negotiate lower rates with medical providers.

Even though they can charge more money in those areas because doctors and hospitals are charging more, they still needed to hit certain price points to be as affordable as possible so you would be able to buy it.

The whole idea of the negotiated rate is based around the potential number of patients an insurance company can drive to a doctor or hospital.

If an insurance company doesn't have a high enough number of clients in an area, there isn't much leverage for them to ask that you be treated for a lower rate.

In the 57 counties Medical Mutual stopped offering health insurance in this year, they only accounted for 25 percent of all their business.

Will Medical Mutual offer health insurance in my area again?

At least that is their plan. Medical Mutual said they hope to be back offering plans in all 88 counties in 2018 or 2019 at the very latest.

However, I'm not so sure how fast you'll be running back into their arms in 2018 if they're around.

Of course, if the price is right it will be hard not to.

This explanation doesn't change the fact that in 2017 you're going to need to find health insurance from someone else.

But, I do hope it gives you a little more detail on the tough decision Medical Mutual was faced with and how the entire Obamacare law is turning the heat up on everyone involved.

Let's find out which insurance companies you can buy health insurance from in 2017 and what plan is going to be right for you?