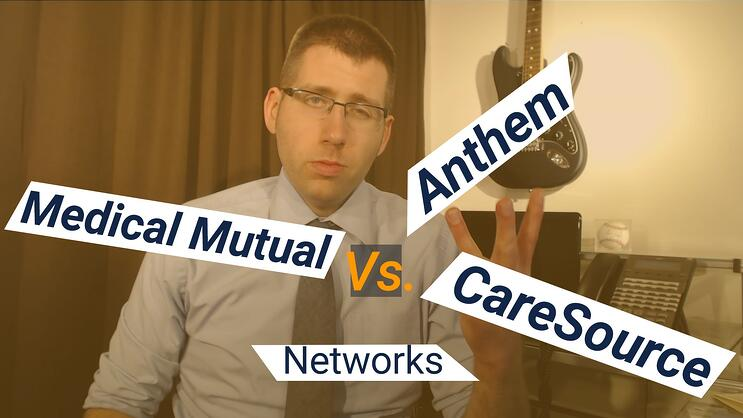 Since the start of open enrollment for 2016 on November 1, I've been asked the same questions over and over again about these three companies and their network of doctors and hospitals, or lack thereof.

So today I'm going to do what I do best and provide this answer for you in as much detail as possible. This three way comparison should leave little doubt which company will be right to handle your health insurance in 2016.

We're going to work our way up and save the best for last.

Before we get started, full disclosure, CareSource doesn't work with independent insurance agents (that's me). That means I do not have the same first hand access to the company's offerings as I do with Medical Mutual and Anthem.

The worst part about CareSource not working with agents makes it looks like I'm being biased when talking about their network.

The more you read on our site, the more you will probably learn that is not true.

There is one company very similar to CareSource who does work with agents. That company is Molina and I am an appointed agent with them. My opinions about CareSource are the same as Molina.

Real quick, CareSource (and Molina for that matter) started out as a Medicaid provider in Ohio. They would offer health insurance to low income people and families who were assigned to them from the state.

In 2014 they decided to try their hand at offer health insurance directly to you.

Their most popular plan type, the Just4Me plan, is going to provide very limited access to doctors and hospitals around the area.

I ran a search within a 60 mile radius from our home office in Ashtabula, OH. It turned up 8 results.

If you're familiar with the Northeast Ohio area, you will notice that the Cleveland Clinic and University Hospital systems are missing from that list.

Those are the top two facilities in this area that will not be available to you in CareSource's network.

To put it another way, you're not going to have many options if/when something really goes wrong. A majority of your area's top specials will be “out-of-network.”

So before you start to give CareSource serious consideration, you're going to want to know what you want your options to be when it matters most.

The pre Obamacare champion has held firm now for a forth year in a row offering a middle of the road network.

Prior to 2014 Anthem was the network king, no company could come close to matching their combination of in-state and out-of-state coverage.

2014 saw the company do a complete 180. It got a little better in 2015 (mostly out of Ohio) and regressed a little for 2017. Mostly by limiting their Blue Card access to Emergency and Urgent care facilities out of sate.

I've documented the shortcomings of Anthem's network in several place on our site, but here's a quick recap.

Anthem's network philosophy has been to provide you with one major hospital system in your area and exclude the rest.

For example here in Northeast, Ohio they have chosen University Hospital. That means no Cleveland Clinic.

Due to some complicated insurance company and hospital agreements, that I won't bore you with (mainly because it makes my head hurt). Anthem can technically call the Cleveland Clinic an “in-network” hospital.

They can do this because they offer a 2 tiered network. The second part of the tier works just like other insurance companies “out-of-network” benefit.

Here's a list of the hospital systems Anthem has chosen in other cities:

Overall, Anthem - even with it's network shortcomings - will still offer you more choices when making major health treatment decisions.

Like I said, we saved the best for last.

There's really not much to say other than Medical Mutual's POS network is going to be one of the best money can buy in 2017.

There is one noteworthy exclusion from their network and that is the Case Medical Center in downtown Cleveland. This is the main campus for the University hospital system.

However, as more and more Medical Mutual clients bring this exclusion to their attention the more willing they are to run treatment through the nearby Ahuja Medical Center, which is in-network.

The crazy part about this entire conversation is that, with the exception of CareSource, rarely will you find significant savings to justify the limitations Anthem and others are offering. A majority of the time you'll find Medical Mutual to be the most affordable.

If I were to compare each company's network to a type of cheese, CareSource would be swiss (cue rimshot), Anthem's would be a slightly dry ricotta and Medical Mutual's would be a perfectly aged hard parmigiano with one spot of mold.

I know it's tempting to bite at the savings companies like CareSource are offering, but as my dad likes to say, if you're on trial for murder do you want a public defender in charge of saving your life or do you want the best lawyer money can buy?

Of course, you're an upstanding human being and would never be on trial for murder, but I think you get the point.

Learn what the real cost is behind all this network madness and discover how to pick the right plan based on your medical needs.