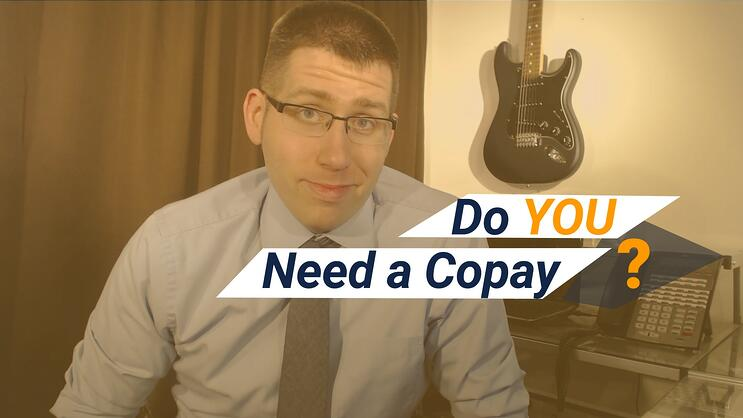 What if Your Health Insurance Policy Doesn’t Have Doctors Office Copays?

It's becoming harder and harder to find a health insurance policy that is affordable and offers unlimited copays for you and your family to see the doctor.

While I'm of the opinion that should be pretty far down on your list of priorities when deciding on a policy, there's something new that's slowly changing my mind.

We'll get to that a little bit later, but first let's take a look at if this is something your health insurance policy should do?

Do you need copays?

I've been on record for over three years about my general distastes for this coveted benefit. At the center of my argument was cost inequality.

Normally the copay plan would cost you substantially more money each month than you could ever hope to get out of that benefit.

Math never lies, well at least if you do it right...

Since I first laid out this simple math equation, a lot has changed with health insurance to make that idea more true and less true all at the same time.

Two years ago the Affordable Care Act was officially unleashed on the country and as a result things got more affordable for some people and A LOT more expensive for others.

The subsidy or tax credit game made it almost impossible to make blanket statements about what benefits we're a good value or not, since everyone wasn't paying the same price for the same plan.

On top of that, the price gap between copay and non-copay plans got smaller.

What does that mean for copays now?

As we head into year three of Obamacare, prices continue to increase at an unstainable pace. The subsidies and tax credits that make these prices “affordable” for some people haven't been able to keep up.

Before I saw this round of increases this year, I thought adding a supplemental plan to your health insurance might be a decent solution.

I still think that is a good idea for some people, however that new thing I mentioned earlier might end up being an even better value.

How can you go to the doctor as many times as you need?

Have you heard of this new thing called telemedicine?

If you have, good.

If you haven't, it's simply having a doctor's visit over a video call.

I guess the name could use a little work… But that's what they're calling it for now.

You essentially pay a flat monthly fee and you can book as many appointments as you need, whenever you want.

Come down with something over the weekend and don't want to go to an urgent care?

Does it sound too good to be true?

I guess when you think about it, it kinda does.

But here's how the economics of it work.

When you remove all of the excess stuff surrounding a traditional doctor's visit, it becomes a lot more cost effective.

No nurses or receptionists to deal with or charts to manually write in and file. These new services use EHR or Electronic Health Records so that whatever is discussed and treated with your "tele" doctor that information can be easily shared with your regular doctor.

The workload is also shared with thousands of doctors across the country.

Speaking of doctors, what kind of doctors can you see?

You're obviously not going to be getting a video call from your doctor down the street, but you will be talking to a doctor who is licensed in your home state.

Here's a list of some of the more common things you can ring up one of these on-demand docs for.

They can even write you a short-term prescription for medications like.

You'll also have access to a national network of pediatricians.

How much does this tele doctor service cost?

That's a great question and a bit of a moving target.

From what I've been able to find out, the teladoc services is wholesale to whoever wants to sell it and they can put different packages together and sell it to you for whatever they want.

I'll say prices will vary, but depending on your “package” you should expect to pay something between $12-$30 a month for this service.

In fact, we've been able to put together our own teladoc package for you that also includes some dental and vision discounts for as little as $15 a month.

Indeed they are, in different forms and fashions.

Most notably, Anthem Blue Cross Blue Shield has built it into almost all of their plans. They call ii LiveHealth Online though…

If you travel, have a bunch of little kids or just feel better knowing a doctor is only a tap on your iPad away, you'll probably get more value out of this service than someone who lines their pockets with plastic bags at an all you can eat buffet.

The internet has been disrupting industry after industry for over 20 years, now it's your doctors turn.

If we're being really honest, there's not a lot to lose in the deal. The monthly cost is so low there's not much stopping you from trying it out for a month or two and put these new tela docs to the test.

If you have a bad experience or just don't use it enough, you can get rid of it.

Take a look at what a teladoc visit looks like and the process for setting it up.