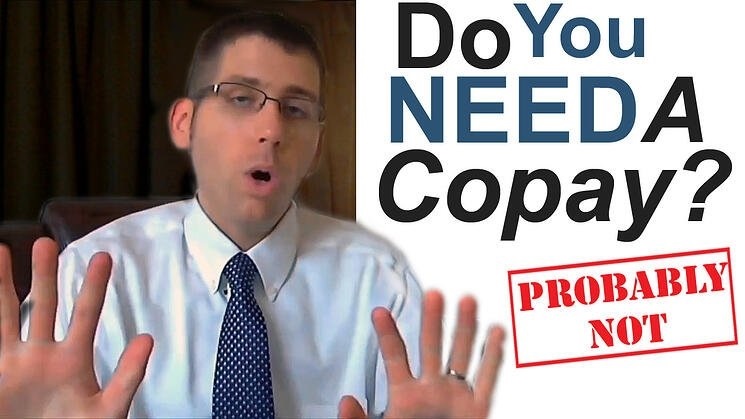 Do You Need Copays With Your Health Insurance?

There's a lot of things you think you might need, but upon closer examination, you find out you don't.

Like another Fast and Furious movie, reading the news paper... on paper or even a reunion album from your favorite band from high school.

They all sound great in theory, but rarely are they able to live up to the mythical-like expectations created in your mind.

These “theories” also exist in the world of health insurance in the form of benefits.

When you have everyone and their mother telling you you need something, you have a tendency to start to believe them.

The biggest, you might not know what you're talking about, offender is copays. A magical word to some, much like a post 90’s Cleveland Indians team, they rarely live up to their potential.

Why Don’t You Need Copays?

It all really comes down to simple math, something I was never fond of (you can ask any of my math teachers, right Mrs. Beebe?).

I going to take a wild guess and say you don't like to go to the doctor. In fact, it might even be your goal to go as little as possible.

So then why would you want to pay for something you're actively trying not to use?

The only answer I can come up with is perception. Remember we were just talking about those mythical expectations?

They apply to this expected and commonly accepted health benefit of copays.

So we're pretty sure you don’t like going to the doctor, even if you do, you would be hard pressed to end up in your doctor’s office more than five times a year.

Let’s get back to that simple math I was talking about, on average you are going to pay an extra $200 - $300 a month for a plan that has a traditional copay. Before Obamacare, you used to be able to compare plans with the same deductible, not anymore.

If you were to consider a copay plan with a lower deductible, something people often do, you could easily spend over $300 more a month for that plan.

For our little experiment, I compared Anthem Blue Cross Blue Shield's lowest deductible, traditional copay plan to their lowest deductible Health Savings Account plan for a family of five (32 year-old male, 29 year-old female and three boys ages 6, 2, 1) who live in Ohio and are all non-smokers. See plan comparison below. 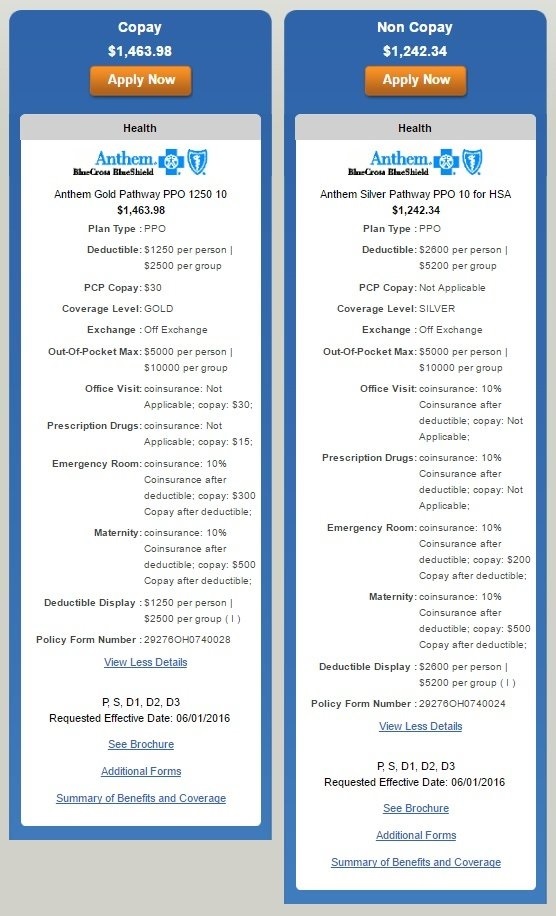 Starting to get a little worried about your copay yet?

The truth is, if you didn’t have insurance, that doctor would be charging you around $100 to see them.

What people aren’t aware of is that regardless of what insurance plan you have, you will always receive that insurance company’s discounted rate for services. This discounted rated varies from service to service, however for doctors office visits it’s generally 40-50 percent.

Doesn’t sound so bad now does it?

It’s like paying extra each month for HBO and only watching it two or three times a year. The cable company isn’t going to give that money back because you didn’t watch, just like the insurance company won’t if you don’t go to the doctor.

Something you should also keep in mind is most copay plans come equipped with coinsurance. This means you could actually end up paying more money for a serious medical procedure. But that is a topic for another day. Check back tomorrow when we take a look at why your out-of-pocket maximum is so important.

Is There a Better Option?

That's probably the best question you've asked yet. To be honest, when I first got into the (insurance) business there wasn't.

But, with the emergence of telemedicine over the last few years, it's a lot easier and affordable to replace that copay to see your primary doctor.

The internet has finally set it's sights on the medical industry and as a result, you've now got a few options to help replace that expensive copay.

There are certainly times when a plan with a "traditional" copay makes sense, they are just a lot fewer and farther between than you probably realize.

Not to mention, since Obamacare went into full force in 2014, fewer and fewer health insurance plans offer them. The ones that do are getting so expensive it's hard for anyone to afford them.

Take a closer look at telemedicine and see if it might work for you.