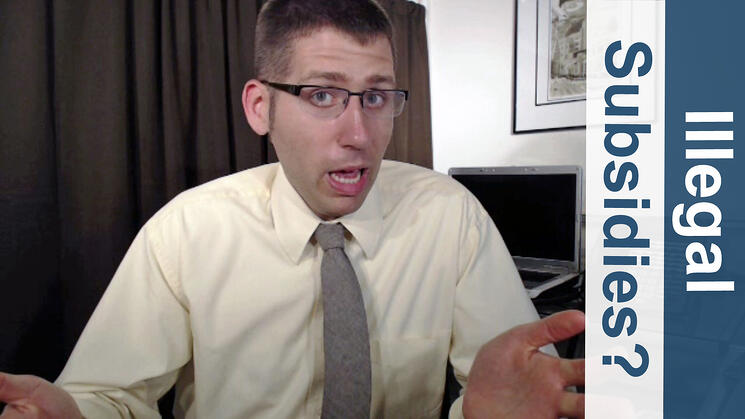 Will You Lose Your Obamacare Subsidy for Your Ohio Health Insurance?

Before we go anywhere, the first thing I need to say is, I don't know.

It's impossible to predict what the courts will do with the latest legal/political squabble over the Affordable Care Act (Obamacare).

What I can say is that you are not losing your subsidy right now and it should stay in place while this debate works its way up the courtroom ladder.

What's The Bad News? (Ohio didn't set up its Exchange)

The way the law is clearly written, which says tax credits, or subsidies, to help pay premiums are available to people who enroll through exchanges "established by the state."

According to a recent article on AP News, the average person now pays around $82 a month for their health insurance, when in reality the plan actually costs $346. That leaves $264 for the federal government to pick up on the check each month through the subsidies.

When the government wrote the law they assumed EVERY state would set up their own exchange or marketplace.

This failure of the English language has been brought to the attention of our leaders repeatedly over the last two to three years.

Nothing has been done about it.

What Can They Do About it Now?

There's a handful of options, some more legal than others, to fix the problem. Of course it depends on how big or how much of “the problem” you think needs fixed.

Pass an amendment to the ACA clarifying the language allowing subsidies for state AND federally run exchange/marketplace's.

This could have happened any day over the last three years, and can still happen anytime, of course that would come at the expense of crossing political party lines.

Pass new legislation to fix this and several other glaring oversights to make the law function properly and as they “intended.”

States can set up their own exchanges to be compliant with the law rendering the federal exchange irrelevant.

As we found out this year, it's not easy to build a system like this from the ground up and costs a lot of money. It's hard to say if Ohio and the other 35 states have the time and resources to do this now.

Smudge the constitution and allow the intent of the law to take precedence over the actual letter.

Not sure this needs to be said, but this is a pretty slippery slope that we have already slid down once with the individual tax/mandate debate a couple years ago.

Regardless of which side of the Health Care Reform fence you're currently sitting on, the wording and execution of these vital systems is sloppy at best.

The more holes that keep getting plugged continue to weaken the overall strength of the haul and continue to compromise the laws initial intent.

The subsidies themselves, while vital and necessary, could be the biggest bandaid of all. A true Affordable Care Act won't be successful until it gets serious about lowering the cost of what we are trying to insurance (healthcare) and ultimately subsidize.