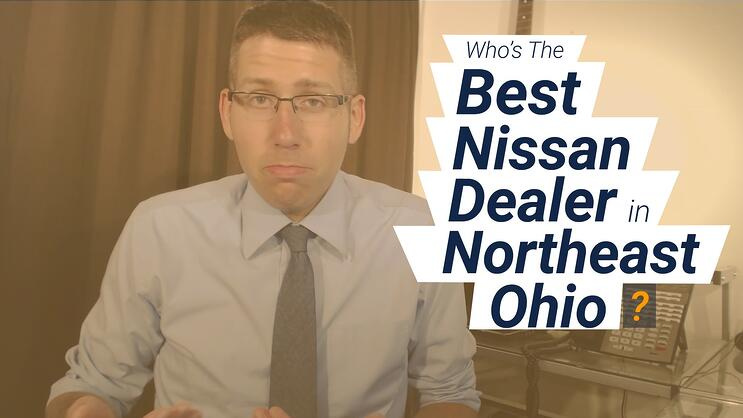 So much so I managed to delay buying my first car (at the age of 32) until a little less than a year and half ago. Now, I've bought two new cars in the last 14 months.

Here's what I've learned during that time that you might find helpful, specifically if you're in the market for a new Nissan.

I was lucky enough to have my grandma, you might hear her answering the phone if you give us a call, buy me a fairly new car while I was in college that lasted over 10 years.

Then I just drove whatever car someone didn't want for a couple years.

Who wants a car payment when you've never had one.

When that was no longer an option and our family size demanded a larger vehicle it was time to put on my big boy pants and buy a car.

What initially lead us to buying our first Nissan was three things.

This lead me to set my sights on the Pathfinder.

My first thought was to consider the Rouge, unaware the Pathfinder existed.

I was pleasantly surprised to find that the Pathfinder was obviously a more spacious option than the Rogue, had the ability to seat seven (more comfortably) and was (even more surprisingly) within our budget.

I test drove a few Chevy's and wasn't impressed. Having rented different cars on vacations from Toyota and Kia. I also have family members and friends who own Hyundai's, Mazda's and GMC.
I've never been crazy about Hyundai in the different models I've rode in. Mazda's have a pretty nice ride, but were a little out of the budget and GMC/ Buick we're not even considered because of price.

I've also never driven a Ford that I liked. These are obviously my personal preference, but these are all the factors that lead me to Nissan.

Having very little experience to go on in the car buying world, I just followed my instincts. I started calling a bunch of dealerships around my town of Streetsboro, OH.

The dealers in play for my first car buying experience were.

The obvious and first choice was Nissan of Streetsboro which is five minutes down the street from my house.

I called the dealership asking to talk with someone about leasing a new Pathfinder. I was pretty surprised to find out that their store policy was to not talk numbers over the phone.

I actually ended up using that dealership as a test drive spot. I somehow managed to miss out on the number crunching sales pitch. The salesman I had been working with just handed me the keys to a Pathfinder to take home for a few hours so my wife could also test drive the vehicle.

When I brought the car back that salesman was busy with another customer and I got to leave the key at the front desk.

I made calls to the other three dealerships on that list and found I-90 Nissan to be the overall easiest to work with over the phone. On top of that they were quoting the best price of any of the other dealerships.

They also happened to be the furthest away from my house, being located on the far west side of Cleveland, close to an hour away.

At this point I was pretty surprised there was this much interbrand competition with the different dealerships.

Going to Make the Deal

Having felt I had done enough upfront leg work without driving all across the region, I was pretty confident in making the 60 minute drive out to I-90 Nissan to get more serious about closing a deal.

I had been working with Mark Dumonthier over the phone and set an approximate time I would be arriving.

We had to drop our kids off at my sister's house in Mentor, which is obviously on the far east side of Cleveland. That meant we were driving from Streetsboro to Mentor to Sheffield Village. Yikes.

One of the biggest questions marks remaining in buying the car for the discussed price, was if they were going to give me enough trade-in value for my current car.

We obviously couldn't know that until we brought the car out to them to be evaluated.

If you're not a big player in the used car value market, this is where I might have had an unfair advantage as my father-in-law and brother-in-law practically run a side business flipping cars.

With that number in mind, I handed my keys over to them to take it into the shop to begin the inspection.

He went back to his manager and the guys in the garage with the counter offer. He came back and said we were good to go for the deal if I signed my initials on the counter offer for $1,500.

I signed and the rest is history. We ended up putting an extra $1,000 down on the lease, which was for two years, to get our monthly payment a little lower.

The Next Nissan (Rogue) Purchase

Fast forward 13 months and we've been enjoying our Pathfinder experience.

My wife and I discovered that we would be welcoming a third little rugrat into the family. That meant we need two vehicles that could easily seat three kids in three different car seats, a booster, toddler and baby carrier.

The search started over.

This time around I didn't want to get another SUV the size of the Pathfinder, because it felt excessive and I don't think our garage could handle it.

That meant we would be choosing this time from the crossover SUV class that the Rouge sat in.

While we were happy with our Pathfinder, I didn't automatically default to going back to Nissan.

Putting together a list of crossover SUV's that had the option for an additional third row seat was pretty short.

The only cars that fit that bill were:

With limited choices on viable third row seating options, after researching the other two options on the list I was lead right back to Nissan.

The I-90 Nissan Difference

Since I had a pretty good experience dealing with Mark at I-90 Nissan last time, he was the first person I called to get the ball rolling on a Rouge.

I was surprised when he came back with a price that was close to what we were paying for our Pathfinder.

With a little less wiggle room in our budget and a little more time to make a decision this time around, I decided to expand the list of dealers and watch the monthly deals closely.

That meant I added:

While the Rogue is the more popular of the two SUV's, I didn't expect the price tag to be as close to our, big Pathfinder already in our garage.

It's important to note that Bedford Nissan and Mentor Nissan are owned by the same guys. The same goes for I-90 Nissan and Nissan of North Olmsted. That means they are going to be able to easily trade inventory with each other.

They are also able to trade with other dealers within a 200-300 mile radius.

For awhile Bedford Nissan was quoting the lowest price over the phone, however the salesman that quoted the price was no longer with the dealership when I called back a few weeks later.

With them out of the running, and a new Memorial Day bonus cash incentive, Mark leaped back to the top of the pack again with a very solid price.

Once again, Mark gave me enough information to feel good about making the drive out there.

Much like last time, the only thing left was to get a decent trade value for my 2006 Ford Focus.

A Quick Side Story

I was a little more nervous this time because back in March I had the guys at Nissan of Streetsboro only offer me $1,000 for my trade.

I reluctantly went and sat for their dog and pony show to hear what their best offer would be.

When I initially started this search, I was hoping to keep the monthly payment just below $200 for the base S model.

That's when Mark dropped $210 for the base model S.

Now the car we were dealing on was the SV and had their “premium package.” Thinking there was no way this model would make it in my price range, I had Mark run the numbers just to see.

I might have made and audible gasp when he slapped $229 a month down for the monthly payment.

I really used the phone test for most of these dealerships, as I didn't want to spends days, if not weeks driving around to every dealership in Northeast Ohio to buy a car.

The dealership that was able to do business the way that was easiest for me and quoted the best price (over the phone), within my needed time frame of purchase, won the right for me step foot in their showroom.

That happened to be Mark and I-90 Nissan both times. I was also very surprised at how willing they were to give me a fair trade value for my existing vehicle.

Let's find out how much your car insurance is going to cost for that new Nissan you're about to pull the trigger on.