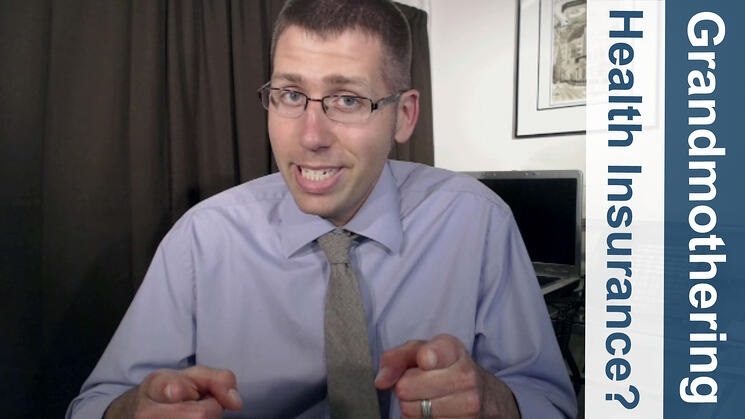 Should you “Grandmother” Your Ohio Health Insurance Policy for 2015 (Avoid Obamacare)?

You've probably heard about getting "grandfathered" into an old or current deal that will no longer be offered, but have you ever been grandmothered into something?

First, a quick note on grandma's, why isn't it called grandmothering to begin with? Let's be honest, they are usually the ones responsible for making the unexpected good stuff happen. Grandfathers are usually just along for the ride.

Now that I've got that off my chest, you may may have already seen your health insurance company send you a letter informing you of your ability to keep your, non-grandfathered, health insurance plan through 2015.

Should you take that deal?

It's hard to say without knowing the full details of your situation, but there are a few consistent rules to live by.

If you're holding on to your pre Affordable Care Act plan for dear life but have since found yourself spending every Sunday afternoon at Babies R Us preparing for the arrival of a new addition to your family, you might want to consider making the switch.

That is of course you didn't add maternity coverage on your original plan, even then you probably have a separate maternity deductible that might not be as good if you were to get on an obamacare plan with one deductible.

If your income is in range to have the federal government help pay for your health insurance, there's a good chance you will want to take that deal. It's hard to imagine a scenario where your current plan would be worth keeping around.

There isn't anything to be afraid of with these new plans, there's a good chance they have the same, if not more coverage than your current plan. The only difference is the government is helping you pay for it.

And before you say it, no you're not buying a health insurance plan directly from the government. The health insurance will be provided by companies like Medical Mutual of Ohio and Anthem Blue Cross and Blue Shield. The only thing the government is doing is giving you money to pay for the plan of your choosing.

Those are the two big reasons to abandon your current plan in favor of a new "Obamacare" plan.

If not, chances are you will be paying substantially more for a plan that is relatively the same, except for a few network changes, which I will get to in a second.

The bad news in all of this, since your plan isn't grandfathered, is you will have to make this switch at some point. Most likely at the end of 2015 as everyone who has a non grandfathered plan will eventually get moved over to an "ACA compliant" plan.

Really when you think about it, this is one time your expert procrastination skills will come in handy.

If you're one of the lucky few who doesn't suffer from this problem, you're going to have to suck it up and stick it out.

What about your doctor?

One very unlikely reason you might find yourself ignoring a tax subsidy or a few added benefits is for the ability to see the doctors you want or more importantly need to see.

While there's a company that should handle 98 percent of everyones network needs, it's possible you could fall in that two percent and find yourself with an imperfect network choice no matter which health insurance company you choose.

Again, let me stress how rare of a situation this is, but I have come across it and just wanted to make you aware of it.

Deciding to "grandmother" your health insurance plan is a pretty black and white decision, outside of the whole network thing, and really comes down to your income qualifying you for a subsidy or not.

If you qualify, you're probably going to ditch your current plan and go running with arms wide open to a new "Obamacare" plan.

If not, you will probably be holding on to your current health insurance plan like a four year-old holds on to their favorite stuffed animal.

So what are you going to do, stick it out with what you got or make a move to something new?