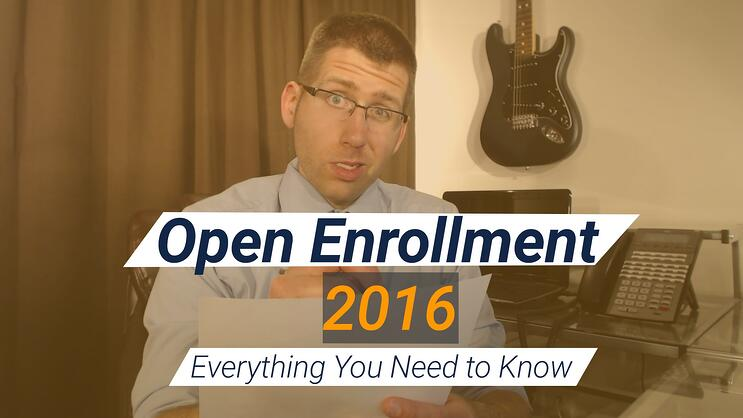 Ohio’s Open Enrollment for Obamacare in 2016: Everything You Need to Know

When the leaves start falling and the days start to get shorter, you might think it's time for football, Halloween or apple picking. But for the last couple years this time has been dominated by something else.

Signing up for health insurance.

During the first two open enrollment periods, following the official release of the Affordable Care Act (see Obamacare), I've helped hundreds of people make their way through the process.

If this is your first time not only dealing with open enrollment, but getting health insurance for yourself, don't worry. It's not mine.

So let's help answer all the questions you might have about this new special time of year.

You'll do it one of two ways. The first and least frustrating way is to sign up directly with your health insurance company of choice.

The only problem with this method is your wallet will be a little lighter since you won't be able to receive any help from the government to pay for your policy if you qualify.

On the other hand you won't have an extra layer of red tape to deal with and will be able to manage your health insurance policy more effectively.

The other option is to sign up using healthcare.gov. This process is a little more involved and will at least at some point during the year have you questioning the meaning of life.

A quick side note: I can help you get health insurance either way. My slightly hostile opinion of the government's website is a product of two plus years helping people work through its growing pains.

But, on the other hand if you're using healthcare.gov there's a good chance you'll be paying a lot less for your health insurance.

Do You Have to Enroll Through HealthCare.gov?

In fact, the only time I would allow recommend you do is if they are giving you a decent amount of money to help pay for your health insurance. The fancy insurance word for that is a tax subsidy.

That is probably one of, if not the most misleading pieces of the new law.

Who Can Help You With Your Enrollment?

There's a decent list of people you can contact for assistance. However the level of help you get will determine depends on the channel you choose.

Independent Health Insurance Agent - The reason they are called independent is because they do not work for one health insurance company. Instead, these agents get appointed with whichever companies they want to sell.

In my case, I'm appointed with every company I can be in Ohio. Even if they aren't a great option I want to be able to give you all the first hand information to validate that decision.

When it comes to health insurance, there are a lot of agents who are only appointed with one or two companies. This is usually a product of that agent not having a heavy focus on health insurance or not wanting to take the time to learn plans for more companies.

Agents can help explain the details of each plan for you and make recommendations based on the information you provide them.

An individual or organization that's trained and able to help consumers, small businesses, and their employees as they look for health coverage options through the Marketplace, including completing eligibility and enrollment forms. These individuals and organizations are required to be unbiased. Their services are free to consumers.

They are not licensed agents and cannot explain plans in detail or make recommendations. They are more or less your executive assistant for your health insurance application and can only help complete the process after making a decision.

HealthCare.gov Representative - These are the people you will talk to if you call their customer service number. They are basically a 24/7 version of a navigator. They are not licensed, can't explain plans or make recommendations. If you're lucky, you might get a different answer to the same question.

Captive Agent - These agents work directly for one health insurance company. They are licensed and can basically do everything an independent agent can, except one thing. Talk about more than the company they work for.

They can explain that companies plans in detail, sometimes even in more detail than an independent agent. They can also make recommendations based on the specific information. However you will only hear how great their company is.

How Much Does it Cost to Work With Those People?

First things first. It's going to cost you the same amount to work with any of these people on the list.

That cost to you is free. By free I mean the cost of health insurance is fixed by law. It doesn't matter how or where you buy your policy the price will be the same, with one exception.

Now just because it's free on the surface doesn't mean it's free for everyone.

Independent Health Insurance Agent - We are paid a commission directly from the health insurance companies. In Ohio we are paid $19-$20 a month per person.

That means if one person bought a policy and kept it for 12 months that agent would make around $240. If there is a family of four just multiply $20 x 4 and that's the monthly commission.

But remember, that $240 is already built into the price of the policy regardless if you take advantage of their services or not.

Navigator - Now this answer is a little trickier than I expected. What little information I could find is dated back to 2013, before Obamacare and it's navigators took action.

Let's start at the beginning, the Department of Health and Human Services made $54 million available to pay Navigators. It was also expected at the time that they could make anywhere between $20-$48 an hour.

Another article stated they could be compensated $58 per person they enroll.

It's important to note that this compensation is not coming from the health insurance companies.

HealthCare.gov Rep - They are technically navigators, however they work directly for HealthCare.gov and are paid as a full or part time employee. I don't have information on those exact dollar amounts, but I would imagine they are getting paid like any call center employee would.

Captive Agent - They are going to make the same commission as an independent agent would, except it will only be with one company.

When Will Your New Policy Start if You Buy During Open Enrollment?

This is a great question that has a slightly confusing answer.

That means you are going to want to give yourself as much of a head start as you can. Don't wait until the last minute because you might find yourself with covered a 30-45 days depending on when you bought the policy.

Also don't assume because you completed the application on November 15 that's when your coverage will start.

Just a fun fact: This is an administrative decision the federal government made when Obamacare went into effect in 2014 that the health insurance companies decided to follow.

In fact, before 2014 health insurance companies used to allow effective dates to be issued the day of application pending approval.

What Happens if You Miss Open Enrollment?

That depends on why you missed it.

If you were just being lazy and forgot to buy health insurance, then you're going to pay the fine tax and wait until next year. Or, I guess you could find a job that offers health insurance.

On the other hand if you already had health insurance during open enrollment and something happens during the year that requires you to make a change or buy your own then you might be eligible for a special enrollment.

How Much is the Tax Penalty?

If you don't have coverage in 2016, you'll pay the higher of these two amounts:

Well, it depends on how much money your family makes every year, but probably.

If you decide to pay the tax you will be paying something for nothing. If you're into that kinda thing, I won't stop you.

Open enrollment is the most important time of year for your health insurance. You are going to want to make sure you give it the time it needs to make sure you and/or your family are taken care for the upcoming year.

If not, you have 365 days to wait until you can do anything about.

Let's make sure you're ready and take a look at what type of plans might work best for you.