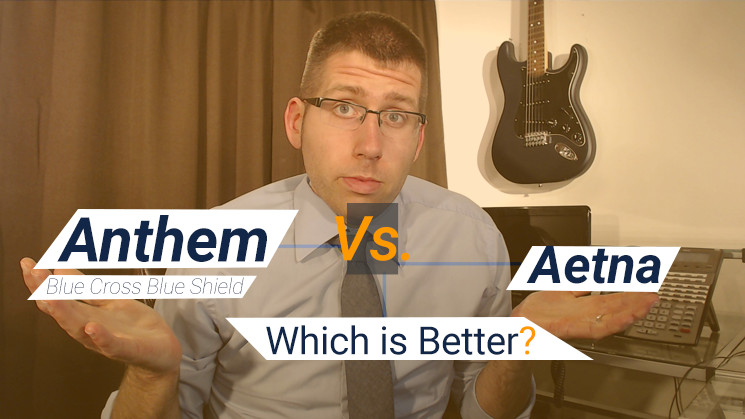 Anthem Blue Cross Blue Shield Vs. Aetna: Who is Better?

This article is a continuation of an ongoing series that compares Ohio's top insurance companies. The goal is to look at the strengths and weakness of each company and how they compare to one another.

Every year at Giangola Insurance, I help hundreds of people sign up for health insurance. What everyone want's to know is which health insurance company they should consider.

Which is fantastic. It's important.

Picking the wrong company could lead to not getting the treatment you want/need or paying more money than you should.

This comparison article should help you understand the differences between these two companies.

It's possible neither company works for you. Being an independent insurance agency, we don't work for one health insurance company. We work for you.

It's our job to help you find the right solution even if it's with a company we don't represent.

In this case, it just so happens that we represent both Anthem and Aetna. So I should be able to help if you have any extra questions.

The truth is with health insurance, agents can be appointed with almost any company they want. It's only when a company decides to not to allow agents to sell their policies that we can't. There are only a couple of companies in Ohio that do that.

If you're not familiar with me or my family's agency, here's a quick backstory about my history with these companies.

My grandfather started our independent insurance agency 60 years ago in 1955. That meant we sold insurance for any companies that we wanted to represent and felt would be a good fit for you.

Fast forward 60 years and I've dealt with Anthem and Aetna since I started in the business six years ago. I have yet to have any major problems with either company.

Of course there are occasional issues with a bill or getting a minor service covered. The fancy insurance word for that is claim. At the end of the day, neither company has left one of our clients in financial ruins.

The Blue Cross Blue Shield Association (BCBSA) is made up of 37 separate health insurance organizations and companies in the U.S. They combine to directly or indirectly provide health insurance to over 100 million people.

Anthem's humble beginnings trace back to the 1980's where as a spin-off of American General Insurance.

They became a publicly traded company in 2001. The final merger in 2004 with several other Blue Cross Blue Shield organizations was the catalyst.

Aetna was originally founded in 1853 and is officially incorporated as Aetna Life Insurance Company. The company's name was taken from a 11,000-foot volcano on the eastern shores of Sicily, Mt. Etna, which was the most active volcano in Europe.

In 1891 Aetna offered its first accident policy, departing from the company's exclusive focus on life insurance. This would lead the expansion into many different types of insurance.

1899 Aetna become one of the first stock based insurance companies to sell health insurance. They would only offer the new policy to people who also had bought an accident and life policy from the company.

By the time the Great Depression hit in 1929 Aetna was already 76 years old and had expanded into auto insurance in the early part of the century.

The company was at the center of major U.S. events. During World War I they insured construction workers and also bonded the construction of the Hoover Dam.

They also provided insurance coverage for the people working on the Manhattan Project. Which produced the world's first atomic bomb.

In 1953 the company celebrated it's 100th anniversary. That same year they invented the first automobile simulator (the “Drivotrainer”) to teach high school kids how to drive.

In 1990 the company stopped selling individual health insurance for a period of time.

In 1996 Aetna sold its auto and home insurance business to Travelers Insurance Group for $4 billion. They also renamed the company from Aetna Life & Casualty to Aetna Inc.

During the 90's Aetna would acquire many companies and become the largest provider of health benefits in the country. In total they would insure more than 21 million members by the end of the century.

In 2000 Aetna sold its financial services and international businesses to ING for $7.7 billion.

Aetna was named Fortune Magazine's most admired health insurance company three years in a row from 2008-2010.

Most recently this year, on July 3, 2015 Aetna signed a deal to acquire Humana for 34.1 billion dollars.

It's possible Anthem is going for quantity over quality. They have 14 total plans (Inside and Out of the Marketplace) available for you to choose from in 2015.

Aetna has the fewest number of plans of any health insurance company in Ohio with a grand total of five.

This is where both companies fall pretty far behind. There are other companies that haven't let Obamacare get the best of them, like Anthem and Aetna. Those companies still offer a mostly unchanged network.

Both Anthem and Aetna decided to significantly limit your choice of doctors and hospitals. Usually only leaving one major hospital network to choose from in your area.

If they happened to pick your preferred hospital system, that might work. If not, than you might have some problems.

You don't want to have to try and squint really hard to see a scenario where one of their plans make sense.

The biggest risk you run with limited choice is not being able to see a top special if needed. As you'll see in the next section, if this could save you money, I might allow it. But, nine time out of 10 it's just not in the cards.

Anthem and Aetna Pricing and Cost

This is where things turn into a battle for last place. Both Anthem and Aetna have had little interest in offering competitive rates. There are companies like Medical Mutual that are cheaper.

Also, don't forget the network limitations both companies have.

This has been the case for the last two years, with a few exceptions popping up here and there. Sometimes I would run a quote for a client and Anthem and Aetna would be in the ballpark, but rarely cheaper.

If no major adjustments are made by either company in 2016 you can expect this trend to continue. The rate for 2016 should start to show up at the start of open enrollment on November 15.

In all honesty, I seriously doubt you'll pick either of these companies. There are simply better options out there that are more attractive and affordable.

It's possible you might fall into one of the small groups of people that Anthem and Aetna are going after. If so, great.

If not, don't simply buy one of their policies because you've heard their name before. There's a good chance you'll be disappointed when you have to use your health insurance.

Let's a closer look at which company and plans might be the best fit for you?