At the end of last year I put together a list of 13 Questions Answered About Ohio's Health Insurance Exchange. It turned out to be a hit with you and everyone else scrambling for information on the upcoming changes surrounding Ohio health insurance.

Now that we are four months closer to the big show, I thought we should check in on what new questions have come up, what old ones can be updated and see where things are at.

1. Is it Called the Exchange or Marketplace?

You would think something as simple as a name would be cleared up by now, however sadly, it is not.

This painfully obvious change should have never happened since the term “marketplace” does a far better job explaining what it is.

I mean, exchange? What were they thinking? They weren't starting a used CD store and it isn't 1998.

Where Does This “Marketplace” Exist?

With most state marketplaces still yet to go live and some people predicting there is no way they will be ready in time.

You can visit www.healthcare.gov/marketplace and read their fluff page on how the marketplace will create an infinite supply of rainbows and unicorns but www.ohiohealthinsurancemarketplace.com doesn't exist yet.

As soon as we know what, where, when and why as it relates to the marketplace, you will be the first to know.

This is the most concrete evidence we have of their existence, colorful stick people.

3. When Can I Buy a Plan From the Marketplace?

Starting on October 1, 2013 you can enroll for a plan through the marketplace. Those plans will not take effect until January 1, 2014 however.

Enrollment for Marketplace plans will close on March 31, 2014. Meaning you will have six months to buy health insurance, that's it.

4. Will the Marketplace Operate on an Open Enrollment Schedule?

As I said above, you will have from October 2013 through March 2014 to buy health insurance from the Marketplace.

It is very important for you to know when the enrollment period is for Ohio's Health Insurance Marketplace, otherwise you could find yourself without coverage for an entire year.

5. What are the Different Medals About?

They are Obamacare's way of simplifying the health insurance buying process.

There are four different plan types you will be able to buy, Platinum, Gold, Silver and Bronze. They will pay for 90, 80, 70 and 60 percent of your health care cost respectively. 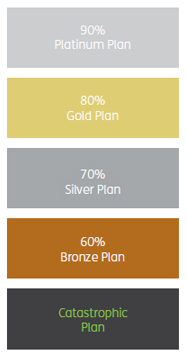 It's important to note that Silver plans will be the only ones to qualify for out-of-pocket subsidies. Meaning, if you meet specific income requirements, your deductible and copays could be covered for you.

Also, right now it seems insurance companies can offer as many plans within a certain medal level that they want. That means Anthem Blue Cross Blue Shield could have five silver plans and Medical Mutual of Ohio may only have two.

6. Will Health Savings Accounts be Sold in the Marketplace?

Right now they are hanging on for dear life and just barely meet the 60 percent requirement of bronze plans.

It's probably in your best interest to pull for HSA's to make it. For everyone who is making a comfortable living and will not qualify for tax subsidies, these plans will save your bank account's life.

7. What Are the Income Requirements to Qualify for a Tax Subsidy?

Here's the breakdown of income as it relates to the size of your family.

This group of people are probably going to be the only ones who get to experience the “Affordable” Care Act. Everyone else will........

For those who make $43,337, $58,281, $$73,241 and $88,201 and up are going to need to start thinking about their options now. There are no cost saving measures in place currently to help offset the substantial increases expected next year and beyond.

Also, Unless you are in a job that allows you to directly control your income, I doubt your job will give you a raise to cover those added costs.

NOTE: Don't think because you have a job that traditionally offers “good” benefits that you won't be affected by this. Teachers, government employees, and other unionized industries stand to suffer the most “sticker shock” at the start of 2014.

8. How Much is the Individual Mandate, Tax, Responsibility if I Don't Have Health Insurance?

The amount of money you will be required to pay is based on a percentage of your overall income or a fixed fee, whichever is greater.

Here's how it breaks down over the next few years:

Note: Penalty for dependents under age 18 is one half of the individual amount.

9. Will I Be Exempt from Having to Buy Health Insurance?

I doubt it, but anything possible.

The only people who will NOT have to have health insurance next year are as follows:

I'm glad you asked this question. It's the one I'm most concerned with.

It looks like anyone who is able to “sell” you a plan now, can help you understand your options inside the Marketplace.

That is of course if they take the time to go through the 3-4 hour registration process the federal government has required.

There will also be an entirely new profession dedicated to helping you solve your health insurance problems. Those people will be called “navigators” and will be employed directly by the government.

They are the government's alternative for using an independent agent or broker.

There is an article on about.com that does a pretty decent job of explaining potential pitfalls of this newly created position.

Aside from the statement that a “Insurance Navigator is not an insurance agent, this person will be impartial and help people and small businesses make the best choice instead of trying to sell them a plan that will make the insurance agent the most profit.”

The last time I sold a plan to someone to make the “most profit” would be my first time.

That lazy assumption aside, a Navigator might have the biggest conflict of interest out there, since they will be getting paid by the government or making a commission off selling government plans.

Which could lead to all sorts of tomfoolery within the system.

And we didn't even talk about their lack of experience and the fact they may not even have to be licensed!

12. Should I Consider Buying a Plan from the Marketplace if I Have Insurance Through Work?

Especially if you meet those income requirements listed above. Don't think just because your job is offering health insurance that it's going to be your best option next year.

If anyone is giving “certain” or “absolute” insurance advice today they are slightly delusional or psychic.

We all have ideas of what is going to happen, but until there has been a chance for these new laws and regulations to play out. It's impossible to say what you SHOULD or SHOULD NOT do.

13. What About the Small Business Marketplace (Shop)?

Like a highly anticipated video game, it has been delayed an entire year.

The small business marketplaces were supposed to give employers the ability to offer a multitude of health care plans, however now will only be able to offer one single plan of their choosing.

I Just Have One Question For You

What has your insurance agent done for you today?

For those keeping score at home, you now have 26 answers to common and important questions about these exchanges marketplaces, all without making you get out of your pajamas.

If your current agent hasn't told you one thing to expect about health care reform, I want you to do one of two things, download my free ebook below or sign up to get real health insurance updates from an agent who knows what's going on.

Of course if you have question that didn't appear on this list, I would be happy to answer it at anytime for you.